Shooting the Movie...The Dark Side

Okay, so it's not really a dark side, but I don't want to paint a bunch of roses. We did have our difficulties.

The very first day of the shoot, my scene was to be shot at night. This is never a good plan. We didn't have our rhythm yet, didn't know what we were doing, and I should have allowed myself more time to prepare. 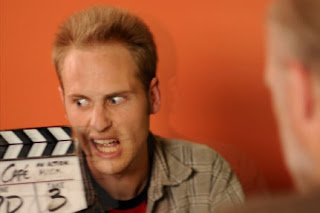 "How did you really feel, Chris?"

I had mentally prepared myself as best I could to step out of the producer role and into the acting state of mind, but it couldn't be done completely. We shot till about 1AM when we filled the audio recorder. Because it was the dumb, expensive one, it required a cable...that the rental company forgot to pack. Nobody had one, so I had to drive home, grab a spare firewire I had laying around, and come back to set. We didn't wrap till about 2:30, which was far later than we wanted to go. Robert was a real sport about it, though, and he hung in for it.

Fortunately, most other days didn't go that late. We were usually packed and out by about 1:00...except for that one, fateful day.

The day we were shooting the final scene was the day we, for some reason, put the two hardest scenes on the same freaking day. We were a little lagged, second to last day of the shoot, and a couple people couldn't make it that day. I was running a camera, taking notes for some of it, doing the producer thing, etc. For some reason, we scrapped our plan for the final shot of the film and did something way more complex that took a long time to set up and execute. It also didn't really work and we never got the thing we originally planned to do. That scene ran late and we were all feeling kinda bummed on it.

The second scene was the one that takes place in the kitchen. We had our biggest name, Aris Alvarado, on set that day, so we were hoping to be super professional and impress him...but that sure didn't happen. It took us forever to figure out the totally new lighting conditions of the kitchen (lots of metal everywhere does NOT make for a fun shooting environment). 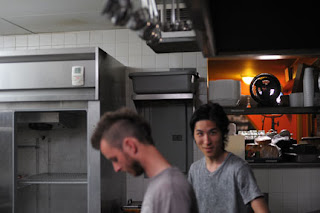 The light...it's not going ANYWHERE it needs to!

After that fiasco, we got to shooting the most complicated scene of the movie in there (the one with the most blocking), and it was going okay, but then we wanted some shots of Aris cooking. Unfortunately, the pilot somehow went out. No one had a lighter (seriously, film set, no one was smoking?), so I had to go to 7-11 and buy one at like 2AM. The gas, it seemed, wasn't on at all, so we couldn't do it and we were pretty sure we broke something. We got the actors out by like 3:00 and Toshi and I left at nearly 4. It was pretty crushing.

I got really sick from the stress/lack of sleep this day. I was also getting up pretty early to prepare all the on set food, making last minute calls and preparations for the shoot, so I didn't really get any rest. The last day, I just sorta stepped back, begged my full crew to come so I could take a little break, and did all the paperwork I should have been doing all the other days (whoops). That last day, we really hit our stride on how to run our set. It was sort of a perfect close to it.

Ultimately, there was nothing to worry about. The film totally works with what we got, and the stuff we missed we likely would have cut anyway.
Posted by Chris Graue at 1:21 AM